I'm currently building an all-new database-driven Gaffin.com (why? Because I can, of course; also, I want to play with the latest version of Drupal). In the meantime, if you want to see the old one, it's here. 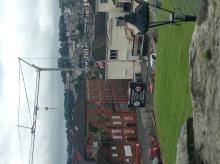 Are you a Catholic Jew or a Protestant Jew?

The New York Public Library has posted a semi-digitized version of the 1940 Brooklyn phone book and linked it to a database of census districts for that year, which, with a bit of hunting, lets you find Benjamin Gaffin at 605 Powell St. (phone number: DIckens 6-9529) and t

Richard B. Gaffin, Jr. is a Calvinist theologian, Presbyterian minister, and professor, Biblical and Systematic Theology, Emeritus at Westminster Theological Seminary in Philadelphia.

First, there seem to be three types of Gaffins out there: The Jewish ones originally from Lithuania and Latvia, the white Protestant ones who seem to have largely settled in Ohio (all apparently descended from William Gaffin, Sr., who was born in 1775 in New York and moved to Ohio in 1814 or so; see the Gaffin genealogy forum for more) and the black Protestant Gaffins down South. The Jewish name is supposedly derived from the Hebrew word for wine. If you're one of the Jewish Gaffins, this is, no doubt, something you've told to your Jewish friends about 16 million times ("you know, the brucha for wine: 'borai p'ri ha'Gohfen'").